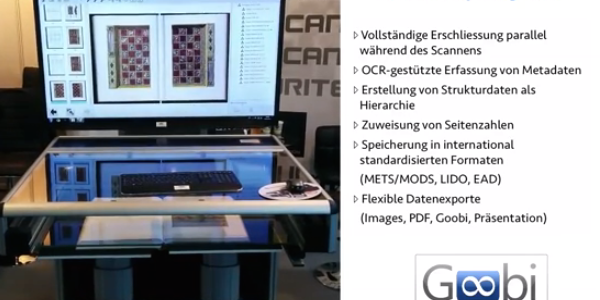 Following a period of intensive collaboration between SMA Electronic Document GmbH and intranda GmbH, robotic scanners can now be operated using the Universal Capturing Client (UCC). The two companies joined forces on SMA’s stand at the 2014 Librarians’ Day to demonstrate how structure elements can be effectively captured while at the same time the ROBO SCAN 1 automatically turns the pages for you.

The UCC functionality newly implemented for the SMA hardware allows you to capture structure elements during the actual scannning process. It also permits asynchronous indexing while other parts of the source work are being scanned.

Further customised UCC features are already being designed for the book scanners, flat-bed scanners and robotic scanners produced by SMA. These will make it possible to exploit completely new and previously unimaginable possibilities in the field of digitisation.

For a brief video of the ROBO SCAN / UCC team at work, see .

Stay tuned for details of the latest developments.